Confined Light Non-Aqueous Phase Liquid (LNAPL) seems to defy logic, and yet we know it exists. Some of the distinguishing characteristics of confined LNAPL have been discussed in multiple issues of ANSR. However, a frequently heard question is “how does the LNAPL get into confined conditions in the first place?”

Confined LNAPL is defined as LNAPL trapped under pressure in an aquifer beneath a layer with relatively lower permeability (or more accurately the higher pore entry pressure associated with the lower permeability soil) that limits the upward movement of the LNAPL.

One main property that controls migration of mobile LNAPL when water and LNAPL are both present in pore spaces is pore entry pressure. At most field sites water is normally the wetting fluid, preferentially adheres to soil, and must be displaced by LNAPL in order for the LNAPL to move into water filled pores. The pressure the LNAPL must exert to displace the water is the pore entry pressure.

Confined LNAPL may occur in aquifers exhibiting heterogeneities regardless of whether the aquifers themselves are confined or unconfined.

In each scenario, the critical step is the migration of LNAPL downward through a lower permeability zone that subsequently acts as a confining layer to the LNAPL. This migration occurs in a network of higher permeability heterogeneities referred to as a macropore network (animal burrows, root holes, fractures, connected sand lenses, un-grouted historical borings, etc.). 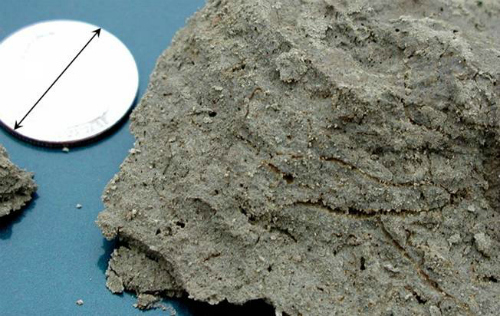 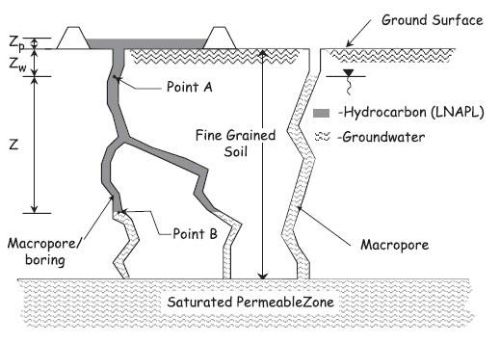 The additional LNAPL head must be balanced by increasing buoyancy of the less dense LNAPL as it penetrates beneath the water table some depth Z shown in Figure 3. If the macropore network encounters a high permeability layer with a sufficiently low pore entry pressure before the depth Z is reached then the LNAPL may enter and spread in that high permeability layer.

3. Vertical Gradients in Macropore Networks: The occurrence of substantial vertical hydraulic gradients within macropore networks in low permeability confining soil layers is common. Mercer and Cohen (1990), Adamski et al. (2005), and Charbeneau (2007) explain that LNAPL can migrate vertically down below the water level if the vertical gradient in the macropore network exceeds:

In this case the LNAPL would migrate down in the macropore network until the vertical gradient terminates in a laterally extensive layer with relatively high permeability (i.e. a confined aquifer).

1. Lower Historical Water Levels: As discussed for confined aquifers, lower historical water levels may allow LNAPL to migrate down to a coarse interval overlain by a finer-grained layer in an unconfined aquifer. A subsequent increase in groundwater elevation may result in submergence and confining of LNAPL within the coarse interval (Fig. 4).

2.LNAPL Hydrostatic Head and Lateral Migration: The LNAPL head resulting from an LNAPL release may cause the LNAPL to penetrate some distance below the water table where it may access a coarse interval and migrate laterally. Figure 4 demonstrates how this process may occur. 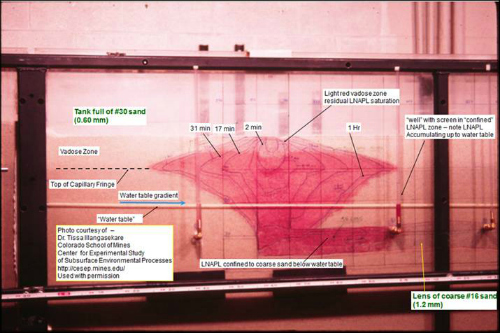 Figure 4: Experiment with tank filled with #30 sand (0.6 mm) and one layer of #16 sand (1.2 mm) below the water level. Experiment shows how LNAPL (dyed red) entered and preferentially migrated below the water level in the coarser sand. Also shows how the LNAPL can be confined in the coarse sand interval beneath a finer sand in an unconfined aquifer.

Mercer, J.W., and R.M. Cohen. 1990. A review of immiscible fluids in the subsurface: Properties, models, characterization and remediation. Journal of Contaminant Hydrology 6, no. 6:107–163.

Real World Limitations: A word of caution – LNAPL migration is complex and many site-specific factors are involved. It is possible, perhaps even likely, that other mechanisms for the origin of confined LNAPL exist. The proposed explanations for the origin of confined LNAPL in this article fit conditions observed at many sites, but these explanations may not fit every site.