Natural processes that occur in and around stable LNAPL source zones can mitigate their environmental risk over time by depleting the LNAPL source zone mass. Calculated loss rates can be significant, and NSZD can serve as a control or benchmark when comparing the effectiveness of remediation options. Natural source zone depletion (NSZD) processes include mass reduction by dissolution to groundwater and by mass volatilization to the vadose zone, followed by biodegradation of the dissolved phase in groundwater and the vapor phase in the vadose zone (Johnson et al., 2006).

Occurrence of NSZD Processes: NSZD processes tend to mitigate the risk of LNAPL source zones by reducing source zone mass over time. Different processes occur depending on whether the portion of the source zone being considered is submerged (in the saturated zone) or exposed (in the vadose zone).

Submerged (Saturated) Source Zone: NSZD processes occurring in the submerged source zone include dissolution of LNAPL constituents into groundwater and subsequent biodegradation in and around the submerged source. For multicomponent LNAPLs (e.g, gasoline, diesel and similar products), the lighter (and usually most toxic) compounds are more soluble in groundwater and are preferentially dissolved. Further mass reduction via biodegradation of dissolved LNAPL compounds can occur prior to groundwater exiting or leaving the source zone area. Over time, both the mass and the average toxicity of the submerged source zone LNAPL decrease due to the combination of dissolution and biodegradation. (See Part 2 of this series for determination of mass loss rates). 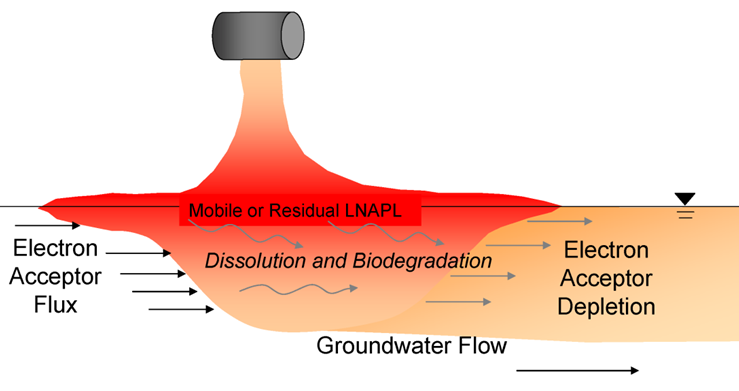 Exposed (Vadose) Source Zone: NSZD processes primarily occurring in the exposed (vadose) source zone include the volatilization of LNAPL constituents into the vapor phase and subsequent biodegradation (Johnson et al., 1998). For multicomponent LNAPLs, the lighter (and usually most toxic) compounds are more volatile and preferentially enter the vapor phase. Biodegradation in the vadose zone soil column near the source zone may then degrade the vapor phase LNAPL compounds. Over time, the exposed source zone mass decreases in both toxicity and the ability to directly generate explosive vapors primarily due to the combination of volatilization and biodegradation (though secondary methane generation may continue for some time). 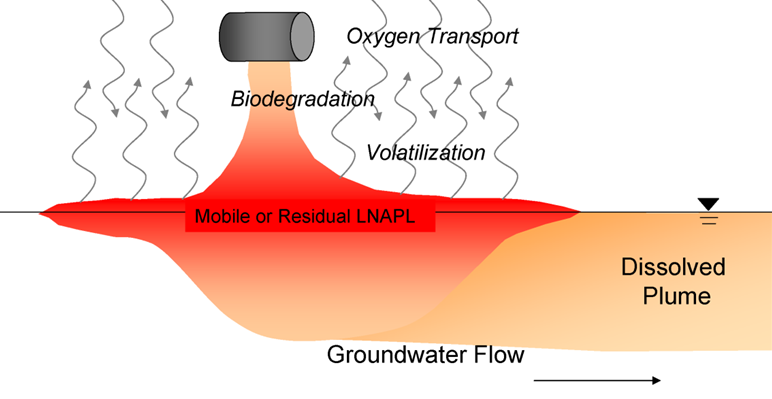 Confirmation of NSZD Processes: Development of complete LNAPL conceptual site models (LCSM) includes an evaluation of the occurrence of NSZD processes associated with both the submerged and exposed portions of the source zone.

Indications that NSZD processes are occurring in the exposed (vadose zone) portion of the LNAPL source zone include:

Part 2 of this series will describe methods for estimating and applying an NSZD mass loss rate. The references listed below are a good starting point to learn more about NSZD processes.

Real World Limitations: A word of caution – natural source zone depletion (NSZD) is an important but complex process that includes many variables. While NSZD can be an effective, natural control on NAPL source zone mass, NSZD cannot be blindly relied upon as a control for LNAPL, dissolved phase, or vapor phase migration without detailed investigation and demonstration of its applicability at any given site. Identification of the occurrence of NSZD is an important part of a site’s LNAPL Conceptual Site Model (LCSM) and may be an important component of a site remedy, subject to testing and verification.