As the scientific understanding of light non-aqueous phase liquid (LNAPL) body dynamics has become more widespread, regulatory willingness to accept risk-based standards for LNAPL remedies has also grown. One critical issue when evaluating risk associated with LNAPL bodies is determining if the LNAPL is stable or if it is expanding in any direction three-dimensionally.

Plume stability is a summary metric derived from multiple lines of evidence, and should be evaluated for both recent and mature releases. Ten lines of evidence have been proposed to evaluate LNAPL body stability (ASTM, in progress). All ten are not required for all sites.

Most lines of evidence have a time component that either requires analysis of temporal trends or can only be evaluated after sufficient time has passed to reach equilibrium. Some lines include detailed numerical analyses of data, while others may be more qualitative. Qualified professionals should determine LNAPL body stability from the selected lines of evidence they believe necessary.

LNAPL Release(s) History: To the extent possible, the number and locations of releases, their quantities and duration (if known), type of LNAPL, amount recovered, and any other pertinent information should be analyzed. In general, older LNAPL bodies are more likely to be stable than newer LNAPL bodies (though exceptions do occur).

3D LNAPL Footprint Character and Extent: This evaluation should comprehensively incorporate all data ever collected about the LNAPL character and extent. Examples include visual observations during drilling, PID/FID screening results, laboratory analytical data, well gauging, soil gas surveys, laser induced fluorescence, ultraviolet fluorescence field screening, utility visual/gas testing results, and any other data that could be used to delineate the areal and vertical extent of LNAPL in the subsurface and track changes that reveal historical expansion, contraction, or stability.

Daughter Phase Character and Extent: Daughter phases in this context include dissolved- and vapor-phase constituents. All available dissolved- and vapor-phase data should be analyzed to delineate the areal and vertical extent of impact. This data should be statistically trended over time as it provides a strong record of historical footprint expansion, contraction, or stability. Stable daughter phase plumes provide strong evidence of stable LNAPL bodies.

Characterize Remediation Effects: If remediation has been conducted, then all available data should be evaluated to determine the impact remediation has achieved with respect to LNAPL body stability. For example, total fluids pumping may have resulted in LNAPL mass reduction and/or smearing, thereby reducing migration potential.

Understand Groundwater Fluctuation Effects: Knowing the hydrogeologic condition (unconfined, confined, or perched) of LNAPL and analyzing trends in gauged LNAPL thickness as groundwater fluctuates can provide a strong demonstration of plume stability. For example, under unconfined conditions a rise then fall in groundwater may submerge then release LNAPL, making the LNAPL body appear to contract and expand. Detailed analysis of diagnostic gauge plots can provide the evidence to demonstrate that no lateral movement of LNAPL occurred; all variations were driven by groundwater fluctuations.

Understand Heterogeneity and Preferential Pathway Effects: An LNAPL body in a low permeability setting may appear to be stable, but natural heterogeneities (e.g., sand lenses) or man-made structures (e.g., utilities) may create preferential pathways that facilitate LNAPL migration. To the extent possible such pathways should be investigated to ensure no LNAPL migration is occurring, though this may be difficult in complex situations such as karst and fracture flow settings.

Quantify LNAPL Mobility, Recoverability, and Migration Potential: Due to the complexity of forces governing migration of LNAPL, no single perfect metric for migration potential has been defined to date. LNAPL mobility and recoverability may be measured as LNAPL transmissivity. Methods exist to calculate pore entry threshold pressures and spreading coefficients to evaluate migration potential, but due to the complexity of the subsurface such calculations are estimates at the plume scale. LNAPL mass flux may be measured either by gradients and LNAPL transmissivity or by tracer testing to evaluate migration potential.

Identify and Quantify LNAPL Weathering Effects: Changes in LNAPL physical properties over time due to weathering can alter migration potential. For example, the loss of more volatile and soluble components can increase LNAPL density and viscosity, thereby reducing migration potential.

Perform Statistical and Trend Analyses: Due to fluctuating natural conditions, measurements over time may vary in complex ways. Statistical trend analyses offer powerful tools to determine if the data exhibit trends over time or space indicative of changes in migration potential.

Following up on last month’s column about analyzing LNAPL transmissivity trends over time and space, we want to test whether LNAPL transmissivities are changing over time in single wells, and summarize whether trends consistently occur over an entire area or collection of wells.  Two nonparametric tests for this objective are Friedman’s, and the Regional Kendall Test.  As nonparametric tests, no assumptions of normality (the shape of the data) are necessary.

Friedman’s test determines if there are differences between columns of data (in this case a table of LNAPL transmissivity values where each column is a year and each row is a well). Computation is easy: Friedman’s simply ranks the data within a row, does this for each row, and determines if some columns have consistently high or low ranks.  The result suggests transmissivities are consistently higher across all wells in some years (p<0.001), with 2012 the highest, 2011 second, and 2009 the lowest (Figure 1).

To test for trend, a Mann-Kendall trend test is run on each well.  Only one well shows a significant trend (Figure 2).  With only 6 measurements per well, all the measurements must be consistently increasing for this test to declare a trend.  However 29 of the 34 wells have positive slopes (see Figure 3).  The decreases in 2009 and 2011 in Figure 3 prevent the Mann-Kendall test from declaring significance with only 6 observations. 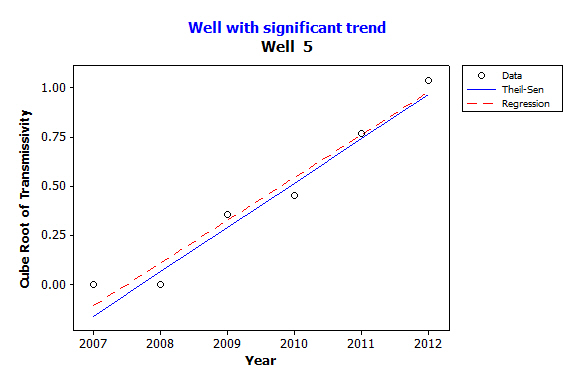 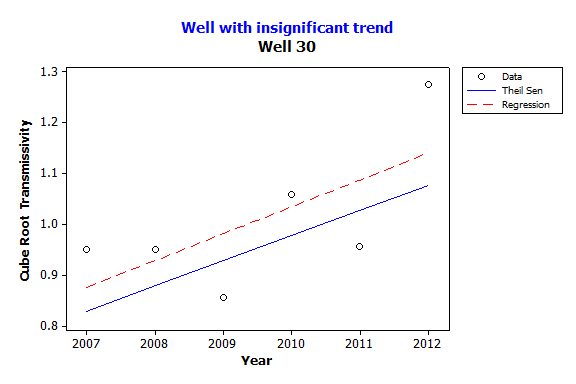 The Regional Kendall test combines the significant test result at one well with the information that for non-significant slopes, the slopes are far from the expected no-trend result of half positive, half negative.  The result is a strongly significant uptrend overall in the pattern at the 34 wells.

For more information on these tests, download the free textbook “Statistical Methods in Water Resources” from http://practicalstats.com/books/