[This article focuses on UV LIF’s application to petroleum fuels and oils, but NOT creosotes and coal tar which require the Tar-specific Green Optical Screening Tool or TarGOST. TarGOST and heavier hydrocarbons will be discussed in a forthcoming issue of ANSR.]

BACKGROUND:
Optical screening tools (OSTs) can “flash” a sample for a few nanoseconds then read the fluorescence that continues long after the flash has stopped. This fluorescence “lifetime” varies from well under a nanosecond to tens or even hundreds of nanoseconds.

OSTs have time-resolved LIF built in to simultaneously record the “color” (spectral nature) and lifetime (temporal nature) of the fluorescence. OST LIF systems can tentatively identify the type of petroleum, discern false positives, and detect weathering of certain LNAPLs.

MULTI-WAVELENGTH WAVEFORMS:
The left side of Figure A illustrates the combined spectral/temporal nature of the fluorescence emitted by the polycyclic aromatic hydrocarbons (PAHs) in diesel, and the right side shows the 2D “shorthand” style waveform. 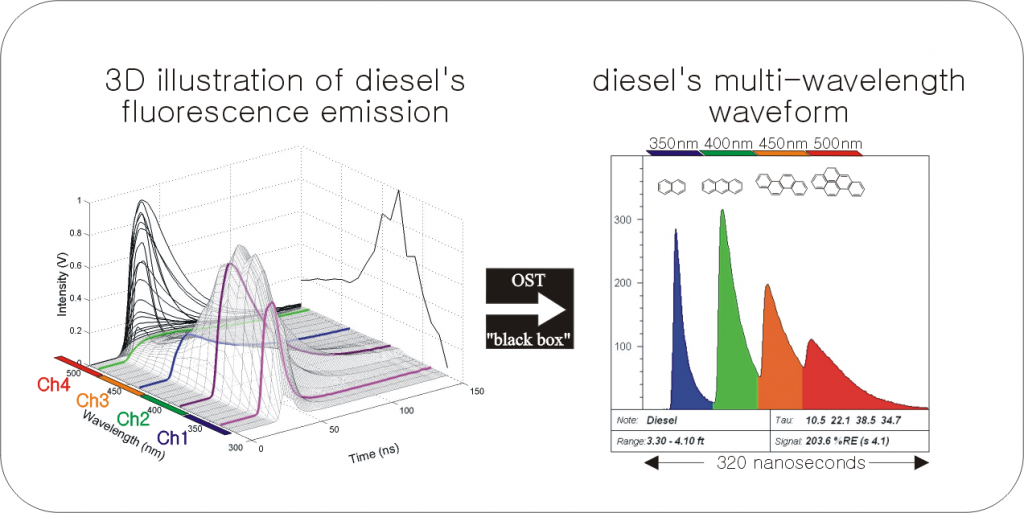 Key characteristics of waveforms include:

Intensity (Amount of Fluorescence)
The y-axis represents the intensity or “brightness” of the fluorescence.

The Four Fluorescence Channels (“Peaks”)
The x-axis of Figure A represents 320 nanoseconds of time during which the four wavelengths of fluorescence arrive at the detector at sequentially delayed times.

Lifetimes (Decaying Fluorescence)
The x-axis covers an extremely short time period to capture the short PAH fluorescence – lifetime is the average time the PAH population stays in the excited state.

PAHs:
PAH logs show the general trend of emission with size/complexity of PAHs (Figure B). 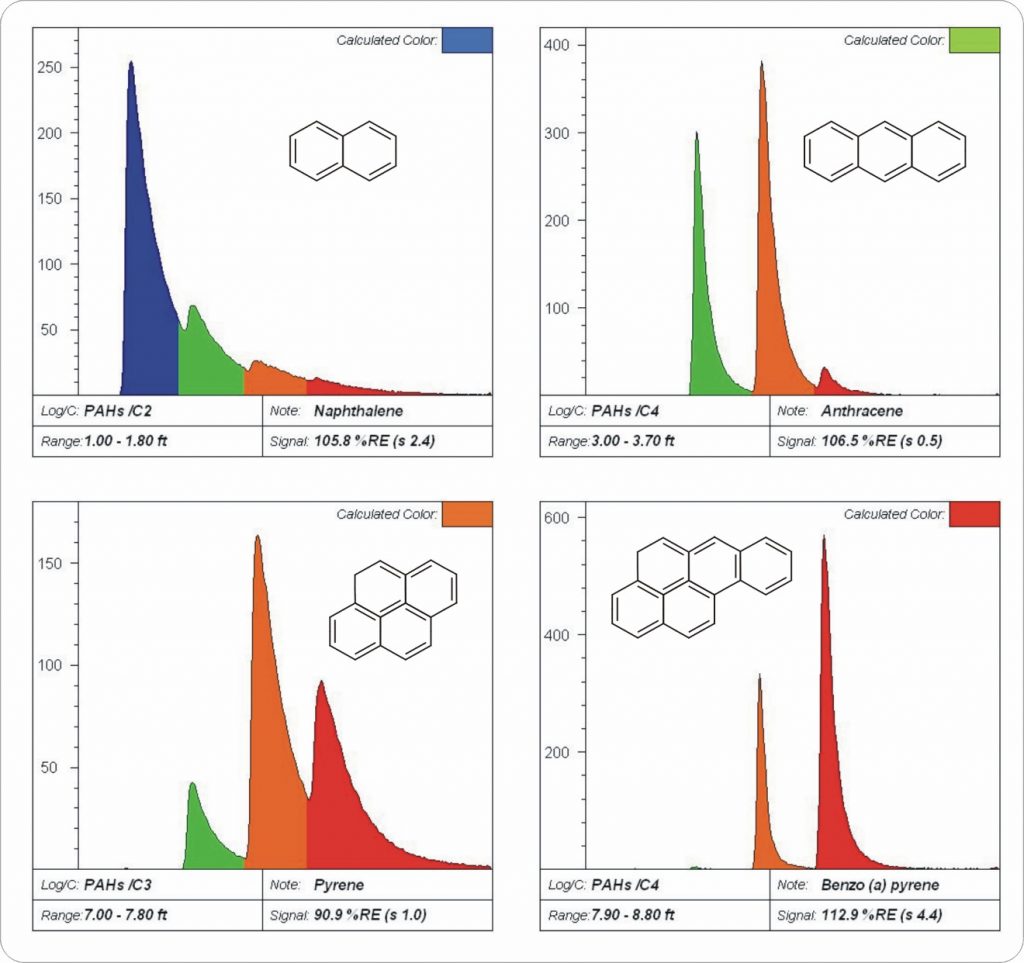 Fuels/Oils:
Fuels/oils contain complex chemical populations with broad forms. The “EPA 16” PAHs only account for approximately 1 percent of the PAHs in crude oil, so there are usually plenty of PAHs to fluoresce. From “blue to red” some common fuel/oil waveforms, shown in Figure C, include the following: 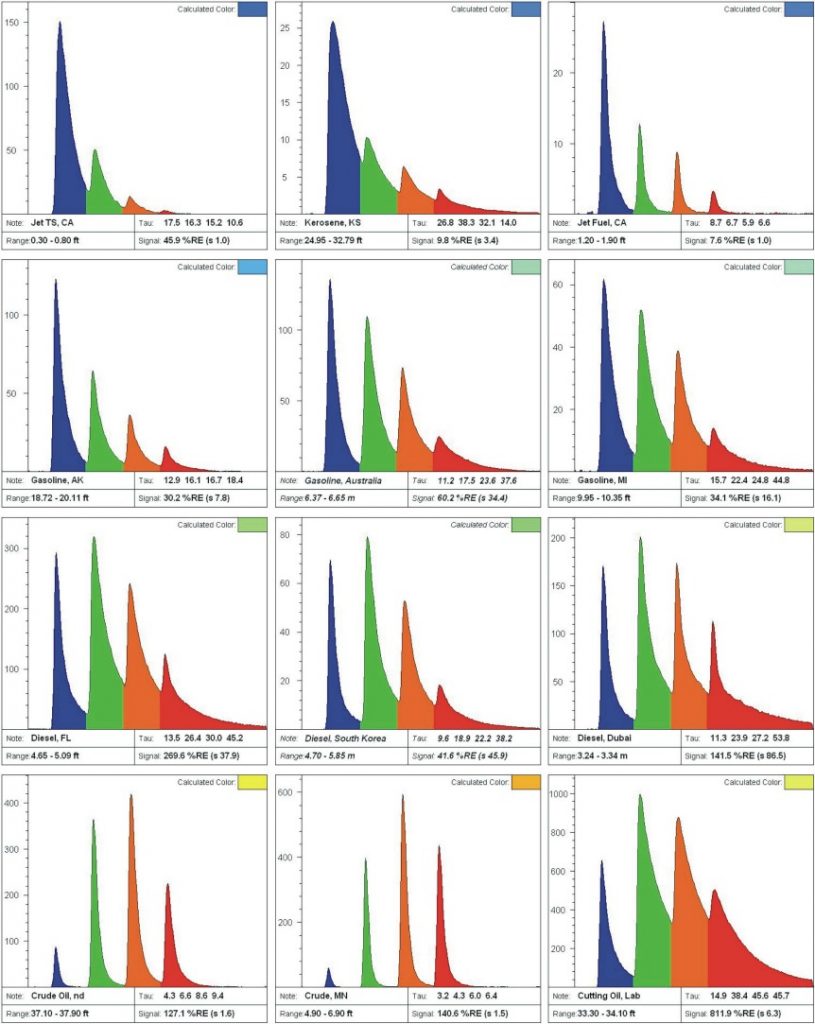 Weathering:
Weathering typically removes the most soluble, volatile, and metabolized PAHs first. Large PAHs remain, which causes a red-shift in the waveform. Simultaneously there is a loss of solvent aliphatics, which usually shortens the lifetime so a weathered light fuel will start to look like oil or even tar. Figure D demonstrates weathering of gasoline in a lab experiment resulting in red-shifting that can make weathered gasoline appear to be “oil”. When jet/kerosene weather they “disappear” (become non-fluorescent) because there are no larger PAHs to continue fluorescing once the naphthalenes are gone.

NAPLs (especially gasolines) can vary substantially in their appearance. The degree of red-shifting is relative to the starting product and site conditions. For instance, one site’s intact (unweathered) gasoline waveform might very well be identical to a different site’s moderately weathered gasoline.

False Positives and Oddities:
Areas with little to no contamination may still show false or misleading signals. Figure E contains a variety of noise, false-positives, or highly unusual waveforms. Be prepared to obtain samples in order to figure out what materials are causing any odd fluorescence waveforms. 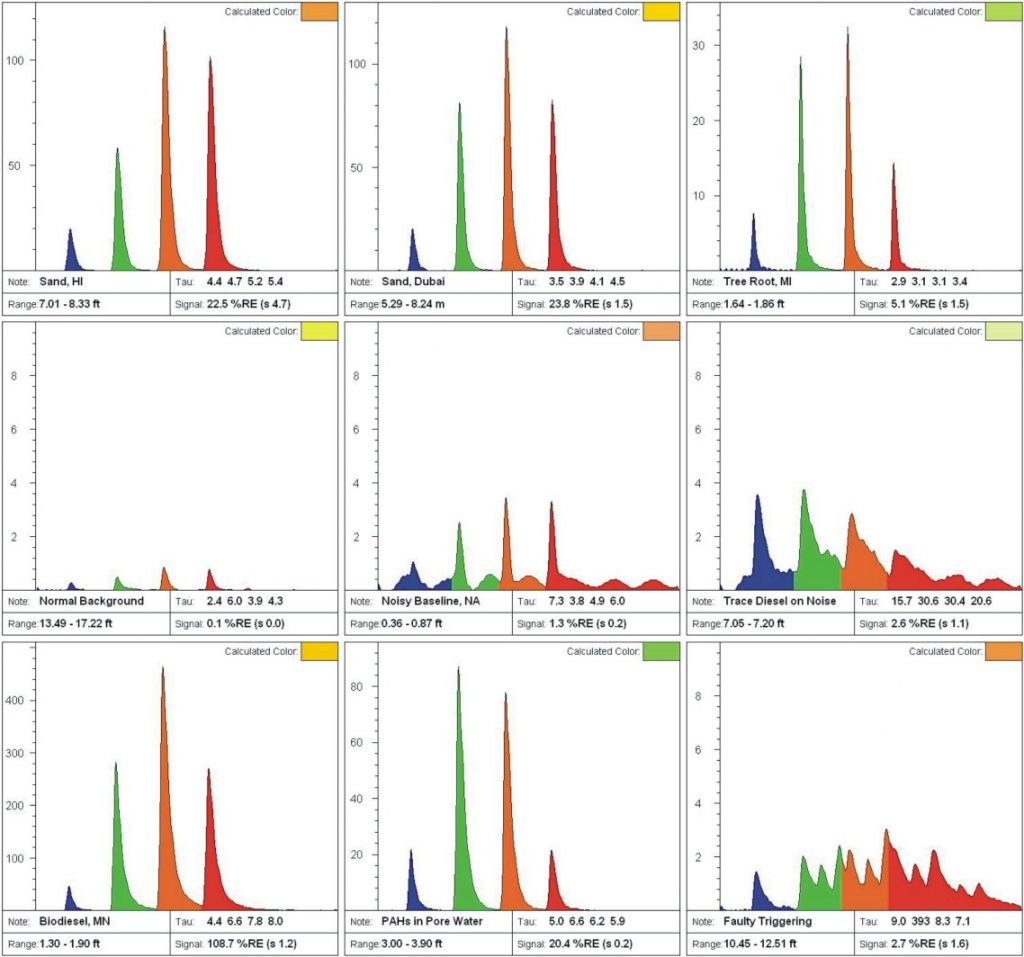 Real World Limitations: Identification of specific LNAPL types via Laser-Induced Fluorescence is an estimation that can be very useful as part of an LNAPL Conceptual Site Model, but should not be relied upon solely for LNAPL fingerprint identification.