DISCLAIMER: This article was prepared by the author(s) in their personal capacity. The opinions expressed in this article are the author’s own and do not necessarily reflect the views of Applied NAPL Science Review (ANSR) or of the ANSR Review Board members.

The migration of gas through sediment and surface water is called gas ebullition. Gas ebullition is caused by a combination of biological and physical processes in sediment. Gas ebullition can be an important mass transport mechanism of NAPL and other contaminants from the sediment to the overlying water column and air/water interface.

Under certain conditions, biogenic gases that are produced in sediment may rise to the sediment surface, and from there through the overlying water column to the air/water interface. This migration of gas through sediment and surface water is called gas ebullition. Ebullition can facilitate the transport of non-aqueous phase liquids (NAPLs) and other contaminants from the sediment to the surface water column, representing an important mass transport mechanism at some contaminated sediment sites (Fendinger et al. 1992, Viana et al. 2012, Viana et al. 2018, Yuan et al. 2009). The objective of this paper is to provide an overview of biogenic gas production in sediment, ebullition processes, and NAPL transport via ebullition. This information is contextualized with a summary of site-specific conditions and characteristics that affect gas production, gas ebullition, and associated NAPL and contaminant transport.

Biogenic gases are produced in sediments as end products from the biodegradation of organic matter by microorganisms in the sediment. The primary biogenic gas generated in sediments typically is methane, but other gases such as carbon dioxide are generated to a lesser extent. Gas production can occur anywhere in the sediment column where conditions favor this process.

Biogenic gases can be released from sediments via diffusion of dissolved gases in the porewater to the overlying water column (Kaliappan and Rockne 2015), or via bubble generation. It is important to recognize that the production of methane does not mean it will form a separate gas phase. This only occurs when the rate of production is sufficiently rapid for gas bubbles to grow, fracture the sediment, and then migrate upward into the overlying water column (Boudreau 2012, Zamanpour and Rockne 2018, Zamanpour et al. 2020). The main variables affecting the rate of production are:

The amount and availability of biodegradable sediment organic matter is thus critical, as it limits both the amount and rate of gas that can be produced at a site. For example, stormwater and wastewater from combined sewer outfalls typically contain large amounts of biodegradable organic matter that can stimulate gas ebullition in surface sediments (Viana et al. 2012). In contrast, the slower rate of biodegradation for some petroleum hydrocarbons (PHCs) may not be sufficient to drive gas ebullition alone in typical sediment environments (Zamanpour et al., 2020).

Sediment fracture can only occur when the pressure inside the growing bubble exceeds the sediment tensile strength and hydrostatic stresses of the sediment (Boudreau 2012). The compaction of deeper sediments results in greater sediment strength, which may prevent the fracturing of sediment and thus reduce the rate of gas bubble migration from deeper sediments into surface water. The presence of NAPL has complex effects on sediment characteristics. In some instances, NAPL has been shown to decrease the sediment strength, thereby indirectly affecting ebullition rates by favoring sediment fracture (Zamanpour and Rockne 2018). Therefore, site-specific conditions strongly affect the potential for ebullition to occur.

Ebullition-facilitated NAPL transport has been reported to occur via three mechanisms:

It is through a combination of these processes that gas ebullition may facilitate NAPL transport from sediments to the water column in situations where NAPL is present within the sediment zone where gas ebullition occurs with sufficient magnitude and prevalence (Zamanpour and Rockne 2018).

Figure 1 illustrates how gas ebullition can enhance NAPL and contaminant transport from sediments into the water column. The main factors affecting gas ebullition rate are summarized in Table 1. 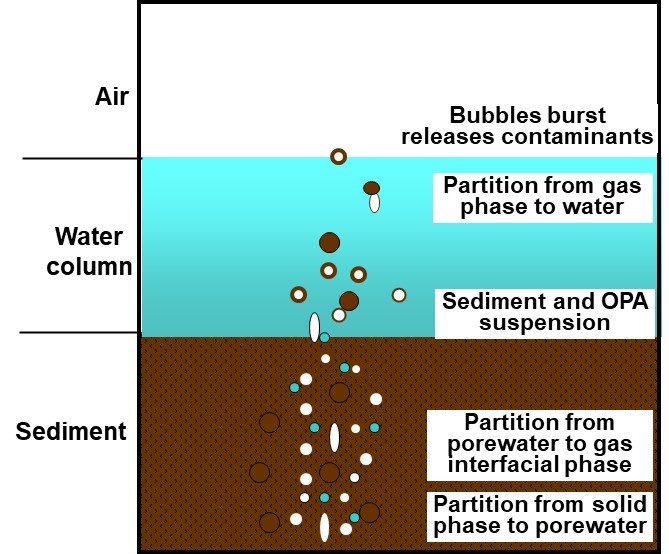 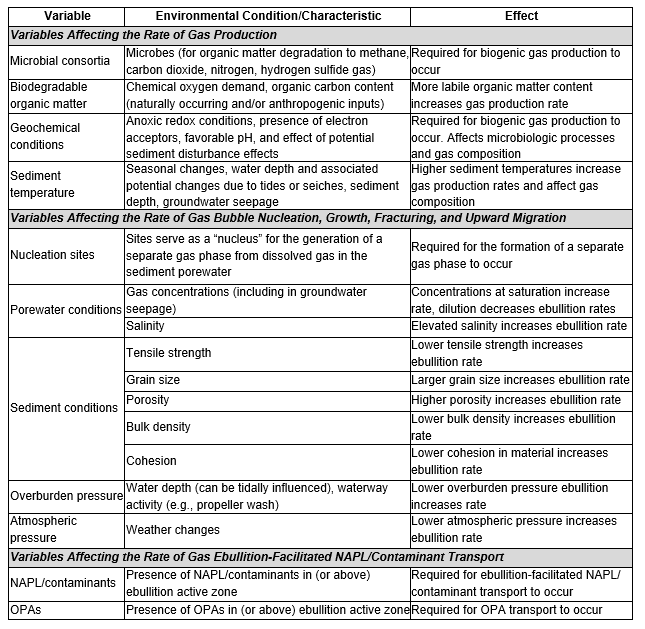 The root cause of gas ebullition is the transformation of biodegradable organic matter to methane and other gaseous end products carried out by microorganisms in sediment. It is important to recognize that biogenic production in sediments is not sufficient to cause gas ebullition. Instead, a combination of site-specific conditions, including rate of biological activity, presence of biodegradable organic matter, porewater chemistry, and sediment characteristics such as sediment strength and overburden pressure are necessary for the development of gas ebullition.

Zamanpour, M. K. and K. J. Rockne, 2018. A Mechanistic Model for Gas Ebullition in the Presence of NAPLs in Sediments. In: World Environmental and Water Resources Congress, June 3–7, Minneapolis, Minnesota.

The research described in this dissertation added to the current body of literature on the effectiveness of active capping in mitigating ebullition facilitated contaminant fluxes and in lowering gas ebullition rates, during an active capping sediment remediation in the WBGCR. The three-year post-capping study provided a comprehensive dataset on ebullition rates and the influence of environmental parameters with reductions in gas ebullition rates of 84%, 63% and 61%. The post-capping gas fluxes were also strongly influenced by sediment temperature and water depth. Incubation experiments to assess gas production potential of the post-cap sediment layers showed that cumulative gas production was similar in the contaminated sediment (CSed) and new deposit (ND) layers, whereas the armor (GAL) and organoclay (OrgC) layers exhibited minimal gas production. These results provide further evidence that the CSed layer is ebullition active and thus continued ebullition is likely following capping. This study also evaluated active capping performance in mitigating ebullition-facilitated metal and PAH transport. Metal fluxes were lowered by 89-97% with re-suspension of surficial sediment being the primary mode of transport. PAH fluxes also fell sharply in the first year but increased to 60% of pre-capping levels in 2013 and followed again by a decrease in 2014. The rise and fall of PAH flux in 2013 and 2014 were accompanied by a rise and fall of sediment temperature although average gas fluxes were similar. This suggests that the higher temperatures stimulated increased gas production in the CSed layer thereby increasing PAH partition and transport for 2013. Increases in sediment temperatures could reactivate gas generation in the CSed layer, with subsequent potential for cap fracture, enhanced advective transport and lower design breakthrough times. The impact of capping on the sediment Archaeal community structure was evaluated by using phylogenetic analysis of 16 sRNA genes from pre- and post-capping sediment. The archaeal community structure was dominated by methanogens in both pre-and post-capping sediment. Capping resulted in a more diverse distribution of methanogens in the surficial zone, with evidence of methanogenesis occurring via the three major methanogenic pathways: hydrogenotrophic, acetoclastic and C1-methylotrophic methanogenesis where as pre-cap Archaea were dominated by acetoclastic and hydrogenotrophic methanogens. Field measured gas fluxes were also significantly correlated with Methanosaeta abundance in pre- and post-capping sediment, suggesting that acetoclastic methanogenesis controls gas production in the GCR. The analysis also revealed the presence of Ammonia Oxidizing Archaea (AOA) in increasing abundance with depth, suggesting a more important role for these newly discovered group in contaminated sediments. This research also explored the potential for using heat tracer methods to evaluate GW-SW interactions and the Darcy velocity in different layers of post-cap sediment. Two approaches utilizing amplitude/phase shift and forward modeling of temperature signal were used. The McCallum method provided a more comprehensive insight into the nature of GW-SW interaction in the top 25 cm, with GW fluxes strongly influenced by stream depth and storm events. The Darcy velocity were also found to decreased with depth in the OrgC and CSed layers, suggesting the presence of horizontal flow paths below the gravel layer. The higher velocities observed in the gravel layer suggest that the armor should not be viewed as additional protection against contaminant migration. Also, the higher seepage velocities can rapidly transport heat and nutrients to the subsurface thereby increasing the potential for gas production below the cap. Heat tracer methods if implemented properly can provide Darcy estimates with lower uncertainty compared to traditional methods.

The primary objective of ANSR is the dissemination of technical information on the science behind the characterization and remediation of Light and Dense Non-Aqueous Phase Liquids (NAPLs). Expanding on this goal, the Research Corner has been established to provide research information on advances in NAPL science from academia and similar research institutions. Each issue will provide a brief synopsis of a research topic and link to the thesis/dissertation/report, wherever available.

In coming newsletters, look for more articles on NAPL movement in sediment in 2021. Moving forward we are planning articles on surfactant injection case studies, bioremediation, and natural source zone depletion. Let us know if you have article ideas or would like to see articles on other topics.

The ASTM Standard Guide for NAPL Mobility and Migration in Sediment – Conceptual Models for Emplacement and Advection (E3248-20) is now available!

Check them all and join us on the ANSR LinkedIn page for discussion or to share your own tips and tricks!