Have you ever wondered why you may have 15 feet of LNAPL in your wells but little to no LNAPL recovery in your remediation system? The cause may be the presence of confined LNAPL.

BACKGROUND: In virtually every issue to date of Applied NAPL Science Review (ANSR) we have mentioned “Confined LNAPL.” In this issue we will define what we mean by Confined LNAPL and identify some of the conditions under which it may occur.

Definition: Confined light non-aqueous phase liquid (LNAPL) is LNAPL trapped in an aquifer beneath a layer that limits the upward movement of the LNAPL. The term Confined LNAPL is used because the mobile LNAPL is under pressure against the underside of the LNAPL confining layer.

INTERPRETATION: When both groundwater and LNAPL are present, groundwater is typically considered to be the “wetting” fluid because water preferentially adheres to the sediment walls and fills small pores. LNAPL (the “non-wetting” fluid) typically occurs in the center of large pores isolated from the pore walls by water. As the pore walls converge to form pore throats, the water from the walls meets in the pore throats, inhibiting the LNAPL movement out of the large pores. This resistance is called pore entry pressure, and as grain size and associated pore space sizes decrease, it can prevent the movement of LNAPL while still allowing the flow of water. 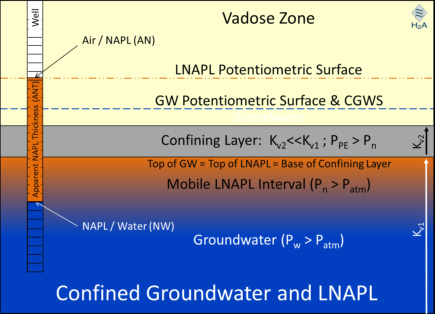 A geologic layer that is immediately above the mobile LNAPL interval and that exhibits a pore entry pressure higher than the capillary pressure of the underlying LNAPL will result in confined LNAPL. Typically this capillary contrast will coincide with and can be identified by changes in other soil properties such as grain size and permeability (e.g., LNAPL in coarse sand confined by fine sand above. See Illangasekare et al., 1995). In such cases, LNAPL in monitoring wells will exhibit a confined response on a Diagnostic Gauge Plot, Hydrostratigraph, or Discharge versus Drawdown Graph, as described in previous issues of applied napl science review. some important differences between confined groundwater and LNAPL include:

SUMMARY: LNAPL is confined when pore entry pressure in the overlying layer is greater than the LNAPL capillary pressure, and may or may not coincide with confined groundwater. The LNAPL is under pressure, and a well screened across a mobile confined LNAPL interval is a “pressure release valve” for the confined LNAPL. As the LNAPL rises in the well to equalize with atmospheric pressure, LNAPL accumulates as an exaggerated apparent NAPL thickness (ANT). This exaggeration may be one reason why you have 15 feet of LNAPL gauged in wells but little to no LNAPL production.

REAL WORLD LIMITATIONS: A word of caution – the conditions described represent selected points within a large range of complex realizations of combinations of liquid pressures, multiphase fluid mechanics, and hydrodynamic groundwater conditions. Similar expressions of exaggerated apparent LNAPL thicknesses in wells may arise from substantially different LNAPL and hydrodynamic conditions. Diagnostic Gauge Plots, Hydrostratigraphs, and Discharge versus Drawdown Graphs may help to distinguish and identify these various conceptual site model conditions. As always, multiple lines of evidence should be used.